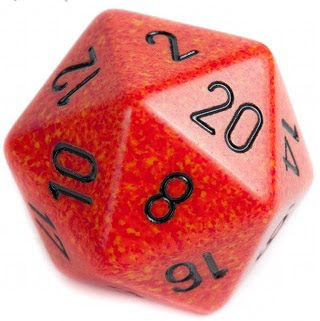 This Platonic solid looks perfectly normal at first glance. But, after proper examination, one can notice it is constituted by phosphorescent gelatinous material that radiates magic.
This small object is of course much more dangerous than it looks. It was created by a petty gods of gambling for his followers to spread chaos and unpredictability in the world. If this object is dropped or thrown against a solid surface, it bounces with force and strikes violently everything in its path. He continues to bounce on the things with which it comes into contact, thereby changing the trajectory frequently and in so doing turning into a devastating projectile hitting everybody and everything. In a closed room, this is equivalent to a death sentence! The only three recourses against this object are its destruction, the desperate flight and the liquids in which the isocahedron flows without bouncing. The icosahedron finally stops without external intervention after two years of incessant bouncing.
In a closed room – this divine object is useless outdoors -, each character takes 1d6 points of damage per round (and fragile items are automatically broken). This damage ignore any magic resistance and the icosahedron is considered as a +2 adamantium magic weapon.

The Book of Ineffable Lore